The only one-woman show in Paris, 100% in English! After years in the US, this born-and-bred Parisian left a successful albeit buttoned-up legal career to let her inner comedian roar. The hilarity ensues as she demonstrates just what it is to be a local in Paris. Live a hectic day in the life of Julie Collas-a Parisian to the core-and have your sides splitting at her endearingly silly French accent.

What do you get when you take a good-to-do Parisian and send her off to law school in The U.S? Julie Collas.

Paris only one-woman show 100% in English that combines the technique of pure American stand-up comedy, mime, singing and real improvisation while also engaging the audience. Snap up a ticket, fasten your seatbelt and enjoy 65 minutes of your day-in-the-frenzied-life of a Parisian that will make you recognize many familiar characters, from the French president, to an elusive waiter in a traditional restaurant, to rude Parisians in the street, a crazy mother and that person on the metro that makes you go "Huh? " This wonderfully chaotic comedy will reveal to you what it is like to be a true Parisian. An open-minded type of French humor that will unfold what truly happened in Notre-Dame and who the famous yellow vests really are.

This is a show for everyone, for French speakers who understand English and non-French speakers living or visiting Paris! After a spectacular start in September 2017, Oh My God She’s Parisian has attracted more than 12,000 spectators from Paris and from all around the world. Over 40 nationalities have come to laugh at her politically incorrect humor and the flaws of Parisians!

What energy! Julie holds us spellbound and had a lot to say about Parisians. A beautiful moment of sharing and good humor, and especially a must-see show you are a pure Parisian, Parisian adopted or tourist passing through "the city of love". A thousand times bravo!!

No, she didn't dare! Funny and raw, mean and friendly at the same time - with the Parisians and tourists who are numerous to spread the word about this show. ecommened to see especially  iif you want to improve your English, but above all to have a great time laughing.

Excellent performance by Julie Collas. She's funny, dynamic, and welcoming, we had a wonderful time. I would recommend without hesitation!

A must see for everyone!

Great way to spend a Saturday evening in Paris, show is funny, smart, spontaneous and definitely worth seeing!

What rhythm and energy! Scouring humour in a charming English easily understood by everyone, run and go see!

We laughed from the beginning until the end, French or not everyone was bursting with laughter during the show! Excellent evening, I truly recommend it!!!

For all those who know Paris (or not), come and spend a great evening.

We were belly laughing from start to finish! If you can see just one show in Paris, make it Julie's!!

A charming primer for life in Paris - Just saw the show last night and enjoyed it quite a bit. The theater is easy to find and access from the Metro, cozy and friendly. The performance was a hoot! Julie is a great mimic, storyteller and can easily riff

A hilarious and magnificent evening! Julie is a woman full of energy and always open to discussing cultural differences. With her enormously funny approach, we didn't stop laughing the whole show! Absolutely something to see during your trip to Par

A great moment à la parisienne - Really great one-woman show! A show with many surprises, funny anecdotes and so true all of them! One of the best parts is the interaction with the audience. Bravo, a must-see in Paris!!

The modern gem Théâtre Bo St Martin was created by 2 television professionals who wanted to start their own live show. They hunted for the perfect location and ultimately setled on transforming a comic book store into the intimate theatre it is today. Where does the Théâtre BO Saint Martin get it's name? The two original founders, Bolender and Bonafus, felt the choice was obvious, go with the shared first few letters of their names!

After opening to other performers, the theatre is now the place to discover new comedians in the Parisian theatre scene. Decked out with all the latest stage tech, the intimate setting will have you laughing along with your peers before brushing shoulders with the comedian at the onsite bar. Situated steps from the Place République, a popular Parisian hub full of choices for dining before or after the show. 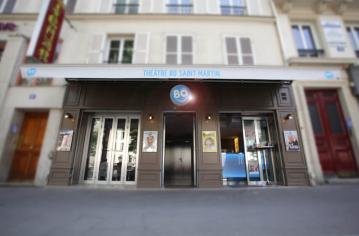 The Bo St. Martin Theater is accessible by lines 3, 5, 8, 9 and 11, and the closest metro stations are République and Strasbourg Saint-Denis. Our hotline can be reached in case of difficulty on the stage on weekdays from 10 am to 7pm Paris time. For details, we invite you to consult the map below.

Tickets for Oh My God She's Parisian do not include a program.

It says this show is not recommended for children under 12. What does it mean?

Julie Collas is a typical Parisian woman. Officially, she speaks French and English. Unofficially ... she loves to play with slang and explicit language to make you laugh, as a typical New York stand-up comedy actor. Get your seatbelts fastened and ready to take off ...

The show lasts one hour and five minutes with no intermission

Both! Julie Collas is a typical French woman. She lived in the USA for 10 years, and came back with a strong will to succeed and endless energy to make you laugh. Parisians, French individuals from the province and from all over the world come see her show.

The Bo St. Martin is a very small theater with open seating. It is therefore not expected that you will tip the usher. However, if you feel like rewarding a very nice welcoming host, please note that you will usually expect a small tip of between € 2 and € 5, which you can give them when they've shown you to your seat. Fun fact: the French word for "tip" is " tip ," which literally translates to "to have a drink."