Exploring the Paris known to the famous French comic and dramatist

It is said that English is the language of Shakespeare, and French is the language of Molière. The French dramatist is known worldwide for his works as a French author of comedies, and remains one of the most well-known French actors and comedians to this day, the Shakespeare of France! Born into a rich family, Molière was well-equipped to begin his life in theatre. At the time, the theatrical world was highly regarded, yet Molière was daring enough to leave behind his bourgeois family status to pursue the live of a traveling actor. While he tried to leave his elevated social standing behind at 21, when he began his own theatre company, he eventually went bankrupt and luckily had his elitist ties to aid him in his later success. Eventually, he would carry on to perform for King Louis XIV, while maintaining his own acting troupe to perform his plays. Much of the comical subject matter in his pieces served as a mockery for the social environment at the time, and as any great comedian the French dramatist made a few enemies at the expense of his jokes. Strangely, little information exists about his personal life, and we must use his plays to interpret the famous playwrights life. Molière would become the most famous French playwright and actor, and known as the father of the French language. This is a tour of all the places and monuments dedicated to Molière in Paris. 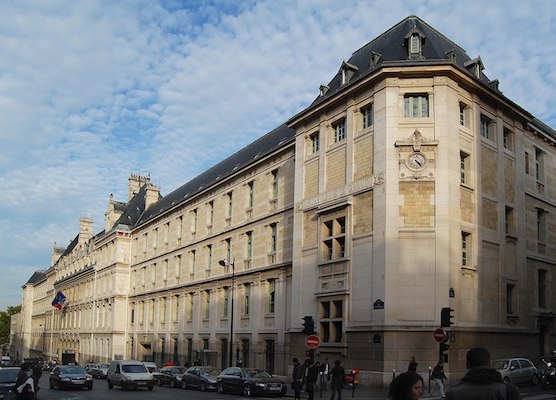 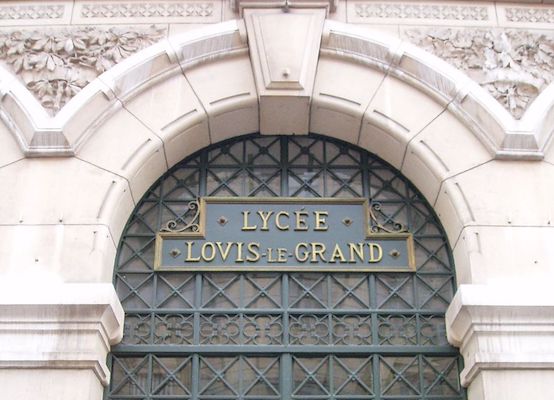 This is the preparatory school where Molière completed his studies, and was first introduced to theatre. This school is situated in the Latin Quarter of Paris, which is traditionally the city's student district. Louis-le-Grand is extremely competitive, and is considered to be a staple in the education of many French elites, with students who become influential scientists, diplomats, and intellectuals. Besides Molière, Victor Hugo, Charles Baudelaire, Voltaire, and Delacroix are all examples of the elite students who have also studied here. Wander through the student district of Paris since the time of the Romans, visit Molière's old school and take a stroll along Rue des Ecoles.

Having wandered through this seat of learning, how about pausing for a French meal in Molière's namesake bistro? This café is located in a historical building at the heart of Saint Germain des Près. Just a few meters away at the palm of the White Cross is where it is said that Molière took his pseudonym (his real name was Jean-Baptiste Poquelin). Stop by at this creperie and enjoy a little snack before continuing on to the rest of Paris!

The Passage Molière is one of the oldest passageways in Paris and one of the 25 remaining alleyways out of the 150 initially created. The cobbled lane was built in 1791, serving as a private exit for the newly inaugurated Théâtre Molière shortly after the start of the French Revolution. During the political turmoil of the years to follow, the passageway was renamed time and again before recovering it’s initial namesake, Passage Molière in the 18th century. The theatre was saved from destruction and renames La Maison de la Poésie (House of Poetry). One of the most peculiar aspects of this seemingly country lane is the houses are numbered in sequence, as opposed to having odd numbers on one side and evens on the other. Nowadays, the passage seems a lovely cottage lane, lined with a few shops and cafes out of the way of the crowds, a perfect hidden Paris visit! 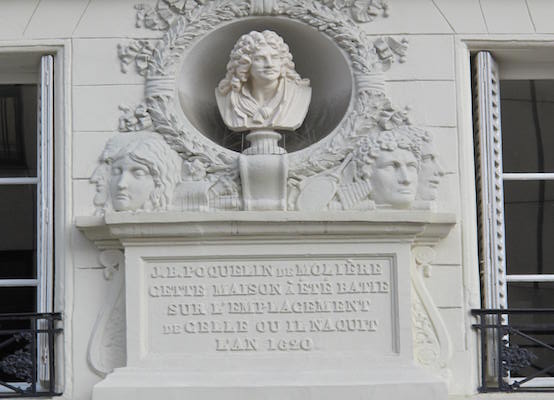 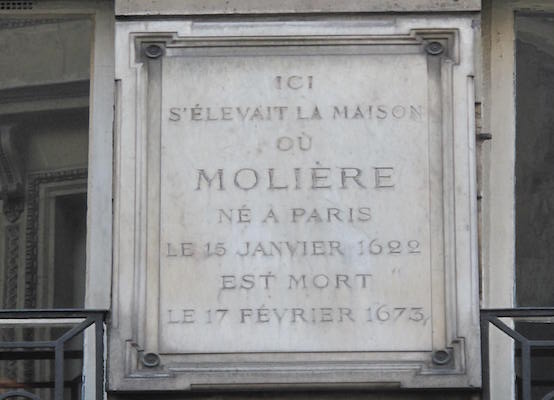 The real birthplace of Molière has been hotly debated. The first contender is Rue de Pont Neuf, where a plaque states that the house was built on the site of where Molière was born in 1620. Seems convincing, doesn’t it? Except for the fact that Molière was born in 1622. At this location, you can even debate its authenticity on the terrace of a second brasserie in Molière's namesake! However, there is another house right down the street that prides itself on being the rightful birthplace. It is located on the corner of Rue Saint Honoré and Rue Sauval, with another plaque indicating that Molière was born there in January of 1622. So, what do you think? After visiting the two sites, let us know which location you think seems like the real deal!

Fontaine Molière, built in 1844, was the first public commemoration and monument for a non-military figure, a huge honour! While his exact Parisian birthplace may be up for debate, this commemorative fountain was built right near his place of death, a true Parisian, Molière was born, lived, and died all in the same Parisian neighborhood! Molière’s sculpture is mainly made of bronze, with two women “Serious Comedy” and “Light Comedy” made of marble. They each hold scrolls that list Molière’s work under their respective categories. Underneath the sculptures are three lion heads that pour water into the basin below. 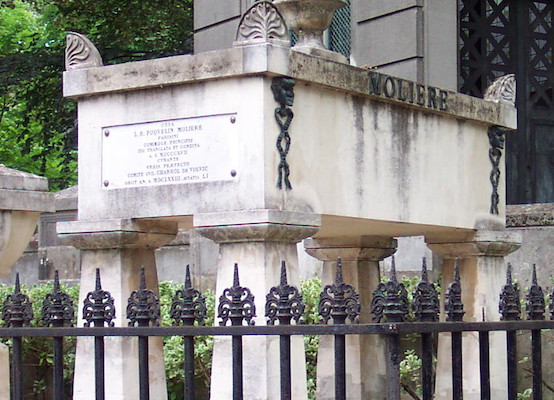 The grave of Molière

Molière lived until he was 51, spending his last 30 years living and breathing theatre. At his very last performance of his own work, The Imaginary Invalid, in 1673, Molière collapsed in a coughing fit and a hemorrhage due to his long battle with pulmonary tuberculosis. Molière, forever dedicated to his work, insisted on finishing the performance and did so, only to collapse again by the end of it. He was taken back to his home and died a few hours later. At the time, actors were not allowed to be buried in the sacred grounds of regular cemeteries, but due to his fame, Molière was given special permission by King Louis XIV. He was buried in the grounds of a cemetery in the area reserved for unbaptised infants, but was later moved to the Père-Lachaise Cemetery like many of the great figures in France. He rests there today, along with other well known people such as Oscar Wilde, Frédéric Chopin, Edith Piaf, and more.

Did you know you can still see Molière's plays performing in historic Parisian playhouses like the Théâtre du Ranelagh? This beautiful venue always has classic performances from Molière, Corneille, Victor Hugo, and more, and even better, all are with English subtitles!

Discover the Paris walked by other literary legends:

Famous French playwrights, past and present

Discover which Molière masterpieces are currently playing in Paris