The gorgeously opulent Palais Garnier is among the finest monuments in Paris, but also its most mysterious. This 1,900-seat opera house is home to much more than the largest stage in all of Europe. Its hidden passages and dirty secrets have spawned one Gothic novel, one hit West End musical, and many a fascinating rumour. Is there really a phantom of the opera? Does his hidden lair exist? Why is a doctor required at every performance?  We’re here to bust the myths and tell the truths behind this truly legendary Parisian venue.

The Palais Garnier was commissioned after an attempted assassination

True – previously, the Paris Opera had been held in a temporary building on rue Le Peletier but an attempted assassination of Emperor Napoleon III made the construction of a new opera house with easy carriage access from the royal palace absolutely necessary. Napoleon III, a regular at the Opera, was travelling there with his wife in January 1858, when their carriage was ambushed and attacked with bombs launched by a group of Italian anarchists. 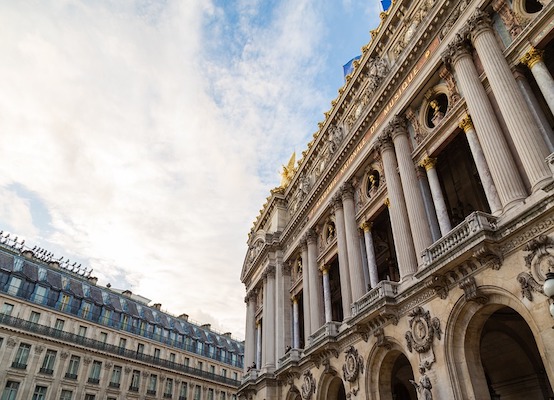 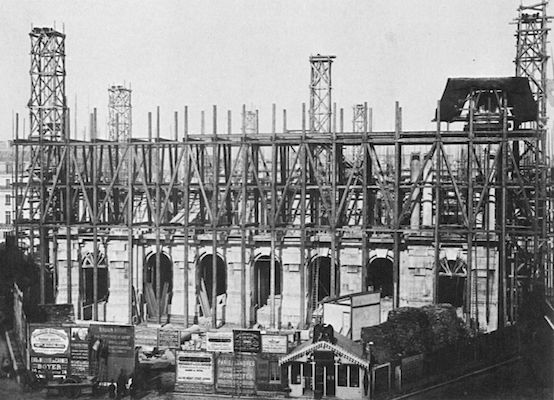 Everyone has always loved the building

False – actually, architect Charles Garnier’s designs proved widely controversial. This was partly due to the fact that, at the time of his appointment, Garnier remained almost entirely unknown as an architect. In an open competition for proposals, he surprised everyone by being selected ahead of other, grander names in the industry. Infuriated by the failure of her favourite in the running, foremost French architect Eugène Viollet-le-Duc, Napoleon’s wife, the Empress Eugenie, took to heaping insults on Garnier’s plans. She critiqued him for what she perceived as his hodge podge of different influences, demanding "What is this? It's not a style; it's neither Louis Quatorze, nor Louis Quinze, nor Louis Seize!" Garnier’s response was simply to define his own category: ‘Napoleon the III style’. Still employed as an architectural term today, Napoleon the III buildings are highly eclectic in style, liberally blending materials and elements from across historical periods.

Book your ticket for a guided tour of the Palais Garnier

The Opera played its part in war and revolutionary uprisings

True – during the siege of Paris in the Franco-Prussian War of 1870 - 1971, the as yet unfinished opera building was used as a food warehouse and military hospital. Then, having toppled Napoleon III in revolt against his disastrous decisions in the war, the Paris Commune, France’s new revolutionary government, took control of the site and allowed their troops set up camp there. The massive, incomplete structure of the opera house became a shelter and food distribution point. Construction, which had been paused during the war, was not resumed until an accidental fire at the old building on rue Le Peletier left Paris bereft of any opera house at all. 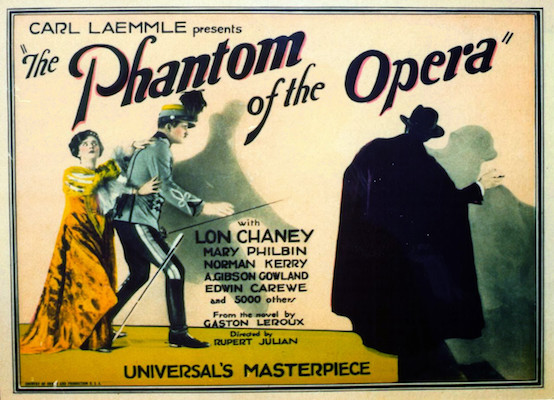 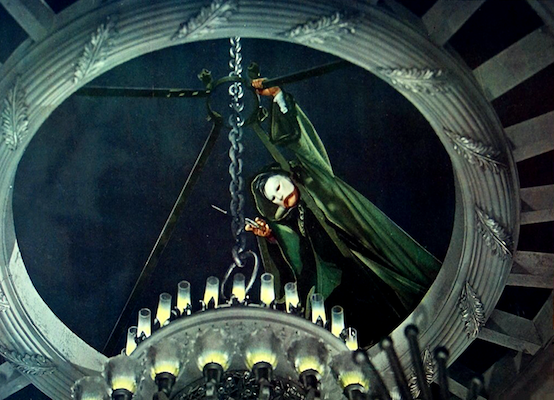 The site is possessed by a malevolent phantom

False – but much of the narrative of Gaston Leroux’s classic novel, The Phantom of the Opera, took inspiration from real events and rumours that circulated the Palais Garnier throughout the nineteenth century. For example, in May 1896, Garnier’s seven ton bronze and crystal chandelier really did break free from its counterweights, crashing down through the auditorium ceiling and killing a concierge standing in the audience below. The tragedy would later memorably feature in Andrew Lloyd Webber’s phenomenally successful musical adaptation of the novel. Its cause, we assure you, can be attributed to freak accident and not to any embittered musical genius lurking under the Opera’s eaves. 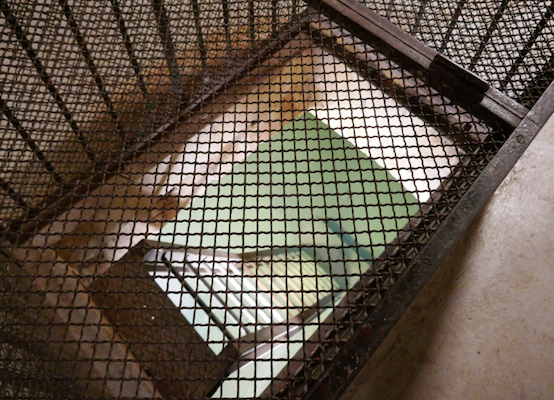 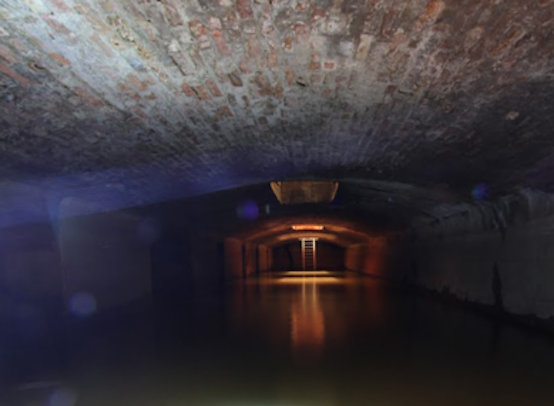 Down at the bottom you’ll find a haunted subterranean lake

False (sort of…) – although the phantom’s spooky candlelit lake is a fiction, the Palais Garnier’s basement does sit above an enormous artificial reservoir. This mysterious concrete cistern was Garnier’s solution to an unexpected abundance of groundwater, uncovered during the laying of the opera house foundations. After steam pumps operating around the clock proved ineffective to drain all water from the site, Garnier came up with an ingenious double foundation that would protect the main structure from moisture. The pressure in his immense concrete cistern prevents any extra groundwater spurting up from underground, with its weight stabilising the building above. Just as in Leroux’s novel, the reservoir is indeed inhabited by a large, white catfish. Only today, it’s fed by friendly opera house staff and the tank is only frequented by firefighters as a training ground for swimming in the pitch black. a

There’s even a network of hidden passages and alcoves

True – they might not link to the lair of a resident phantom but the secret passages of Leroux’s novel do exist. There’s two of them, beginning five levels down into the belly of the opera house basement and climbing up to its fourth floor with a thin metal ladder. One of the two tunnels is still in use, the other now serves as a rainwater evacuation chute. That might seem a little too practical to be eerie but picture the cellar’s arches and alcoves lit by little more than a candle flame and it’s hard not to imagine the ghouls that could be waiting down every passage.

A doctor is required at every performance

True – due to the vast number of audience members at the opera and in case of medical emergency, a qualified doctor must be present at every performance. The lucky person isn’t paid for their attendance but they are lucky enough to be rewarded two free tickets to one of Paris’s most sought after theatrical experiences. This stipulation certainly gained its justification when a female audience member went into labour right in the middle of a performance. Her baby almost became the first person to be awarded a lifetime’s supply of opera tickets, but the Palais Garnier’s management decided against the offer for fear of tempting other women into deliberately timing their own big moment.

False – although the opera’s stages have certainly known their fair share. One performer would only travel from her hotel – approximately 290 metres away – in the comfort of limousine; another required an entourage of seven domestics and a teddy bear; still another demanded that her jewellery by lightly warmed before her entrance. Then there was the notorious case of soprano Lucienne Bréval, who point-blank refused to go onstage until a concierge had uttered ‘merde’ (the French equivalent of ‘break a leg’) in her presence. Such was Bréval’s superstition, that when the concierge happened to be absent one night, she insisted he be contacted to send a telegraph with the word just in time for curtain-up. 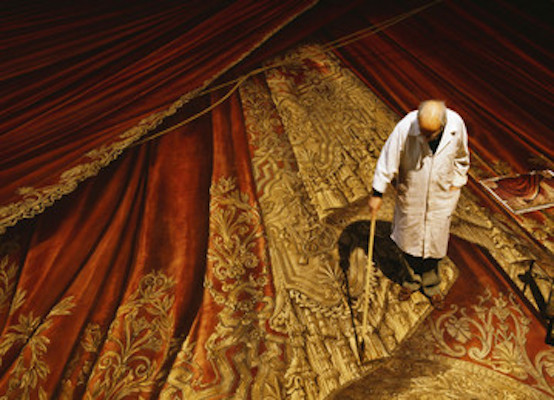 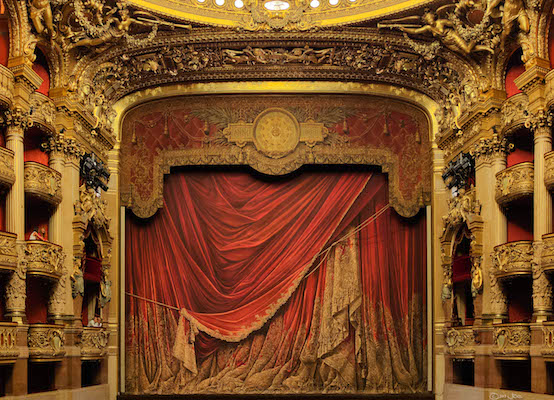 The opera house curtain is made of rich, gold-fringed velvet

False – they may look fancy but these spectacular drapes are no more than an elaborate optical illusion. After the grandeur of velvet curtains, without all the bother, the Palais Garnier commissioned an artist to paint a detailed trompe l’œil (trick of the eye) image onto a simple canvas sheet. Regularly restored, the painting still makes for a convincing illusion today.

False – back in the day, sitting in the expensive seats could pose something of a hazard… The opera’s cheapest options are to be found high up in the auditorium, up towards the ceiling. This was where its middle class nineteenth century spectators would take their places, often bringing food since they couldn’t afford the upmarket restaurant downstairs. Legend has it that, bitter about their inferior position, audience members seated here would often hurl food down at the disliked upper class audience members. The Opera’s solution was to install a thin wire fence beneath the upper tiers, so as to catch any edible projectiles. For years, seats up at the top became known as ‘the chicken coop’.

So there you have it: the honest truth behind Paris’ most rumour-ridden monument. All that remains is to grab tickets to a performance and see the inside of a venue that’s as sumptuous as the productions it hosts. We like to quote a contemporary critic, who quipped back in 1875: ‘why the need to stage such fabulous performances when the building itself is the most dazzling of spectacles?’

Get tickets for a show at the Palais Garnier

Book your tickets for a visit of the Palais Garnier