The evolution of the circus

The circus has been around for as long as we can remember, originating from the era of your great great great grandmother and grandfather this has been the oldest form of family entertainment recorded in history. When the word circus is thrown around the first thing that comes to mind is an individual with his or her face painted completely white, a big red smile similar to that one of The Joker from the famous DC comics but not as creepy, people also picture a big red nose and big silly shoes, but nowadays the circus has evolved drastically going from clowns and animal performances to impressive acrobatic acts from extremely skilled performers. Let us take you through a brief history of what the circus was like back in the day compared to what it is today.

The circus was designed in 1768 in England thanks to the brilliant mind of a previous Calvary sergeant major Philip Astley who served in the war of 1756. There is however some skepticism as to where the circus really originated from, it is said that this form of entertainment has been around since ancient Roman times. Astley’s idea emerged from horse riders who would perform stunts on their horses, considering he was an accomplished horse trainer he decided to open his riding school in 1968, he then became a showman and was successful in Europe after he combined the equestrian acts with various performances including clowns, rope dancers, and jugglers. Performances such as these are traced back to early African civilizations who did acrobatic routines, ancient Chinese juggled, and Greeks practiced rope dancing, bring all these acts together and you get Astley’s circus performance. If you’re wondering where the word circus came from, this is it. Circus originates from the English word circle which was the shape of the amphitheater Astley constructed for his acts but was credited by his former employee Charles Hughes who introduced The Royal Circus in 1782 in London.

The circus arrives in Paris

The circus became such a huge concept that Astley was invited to perform for King Louis XV in the Fontainebleau palace in Paris in 1771. In 1774 Astley was back in Paris and yet again presented his performance to Parisians, he even wrote a book about his journey through Paris called The Modern Riding Master. Having enjoyed Paris so much and seeing that there was profit in the city, Astley returned to Paris in 1782 and established an outdoor circus arena located in what’s known today as Place de la Republique. The circus was a big hit, Astley and his team were even asked to perform for Queen Marie Antoinette in Versailles and King Louis XI in 1786. In 1783 a permanent arena was built, named English Amphitheater. As time passed Astley would travel back and forth between London and France, delivering different acts every time. When the French Revolution began, Astley returned to London leaving his circus arena behind. Years later after there was peace in France, Philip Astley returned to Paris where he stayed and handed over is business to his son John Astley.

A sensation in the United States

The circus concept was drastically altered when it arrived in the United States, it imitated everything the circus’ in England consisted of, but new performances were added. Once its arrival in the 1800s the first to introduce the idea of family entertainment through the art of a circus performance was Victor Pepin. Later other showmen showcased a different approach, they started to use other trained exotic animals besides horses to entertain a big crowd of spectators and it became a prosperous industry in which everyone wanted a piece. More family circuses started to arise, and this is when the world’s most famous circus was born, P.T. Barnum and Bailey claiming to be the greatest show on earth.

The greatest show on earth

Barnum and Bailey presented several different performances, they had a bit of everything from acrobats, to clowns, trained elephants, seals, and elephants, but most importantly they introduced a freak show! Where they would hire people who were born with unique features, for example, the bearded lady, Dog boy a young lad who was born with hair all over his body, the largest man in the world measuring 7’11 and weighing 560 pounds, the four-legged woman, and many others. Audience members went crazy for these new acts and Barnum and Bailey’s most famous attraction which put them on the track to fame, Jumbo the giant elephant. Fun fact, Jumbo truly inspired the Disney movie Dumbo and he is also the reason why we use the word jumbo to describe large objects. 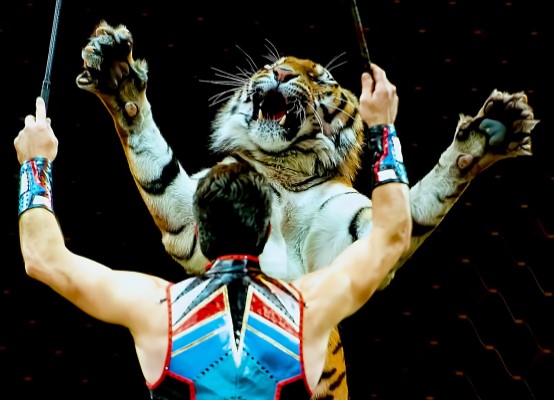 The first traveling circus was created in America, by the P.T. Barnum Circus who partnered up with William Cameron Coup and Dan Catello in order to be the first circus to travel the world by train and set up canvas tents at night to exhibit the show. Later in the 1900s The Ringling brothers, P.T. Barnum and Bailey’s biggest competition bought them off and the circus was renamed Ringling Brothers, Barnum and Bailey circus. The act of involving exotic animals and people with natural deformities or talent inspired circus members from all over the world including Europe, it was a revolutionary concept. Pretty soon showmen from Europe started to imitate the American form of a circus act. Sales decreased dramatically once reaching the 20th century due to an increase in animal rights awareness, this was the reason why Barnum and Bailey closed their business in 2017 after having had a long run in the circus industry.

The story of a clown that went international

There was one clown in particular who was born in 1899 and made a name for himself in the entertainment world. A mute clown who would make the crowd laugh with his mime gimmicks consisting of silhouette performances and the imitation of objects, his name was Scaramouche Jones! If the name sounds familiar it’s probably because you have heard it in the song Bohemian Rhapsody by Queen. In 1999 after having turned 100 years old and before his last performance, Scaramouche told his tragic life story, and this is what made his name bigger than ever. He was the main talk of the 20th century for many years. His life was filled with comedy, but at the same time he had gone through a lot of heartbreaking events. Born to a gypsy prostitute and a father who abandoned him, to being sold to a snake charmer, he experienced a long journey throughout his lifetime, 100 years’ worth. He traveled to many places around the world, but his clown career began in a grim place, a concentration camp in Poland. Not all circus tales are jubilant, an electrifyingly modern bibliography of this clown’s story has been transformed into a one man play entirely in English in the underground Nestle Theater! Made-up of humor and misfortunes, it is a play not to be missed if you want to dig in to the secret background of one of the most famous clowns in history.

A place brimming with history, the Nestle theater is located in the center of Paris in Saint Germain des Près, in an underground cave in a 17th century mansion. Nestle Theater, where the story of Scaramouche Jones is exhibited is comprised of a cozy room with stoned walls that give it an original appearance and it has exceptional acoustic, perfect for an intimate show full of history.

The rise of a new era for the circus

The rise of a whole new circus concept was shaped in the 1960s starting in Europe appearing in France and the United Kingdom ironically enough where the first circus ever was recognized. In the 1970s one specific contemporary circus-inspired the world-famous Cirque du Soleil and it was the Pickle Family Circus. The Pickle Family Circus was known for providing family fun entertainment without the involvement of animals, it was pure fun and filled with humorous acts by skilled actors. The successful circus act comprised of different stories similar to that of a play but with special effects and acrobatic acts. In 1984, Cirque du Soleil was born in Quebec, Canada. Using special effects such as light and sound, prompts, colorful and unique costumes different in every show, and various shows while traveling the world they have amazed audiences from all over and won the hearts of many with their innovative concept of the modern circus. Similarly to this concept, a new groundbreaking performance is also evolving in Paris, France capturing the attention of many spectators with its performance telling a unique story about a boy entering an exotic world through a lamp and trying to find his way back home with the help of new friends. Paris’ Cirque de Paname is bringing a creative circus act to the city jam-packed with special 3D sound systems, light effects, multiple talented actors and acrobats who will perform risky stunts during the performance and other surprises that are shoo-in to please prospectors of all ages. The circus has evolved dramatically over 251 years and now people are more likely to be attracted to acts concerning extraordinary physical abilities, humor, peculiar yet unique narratives, costume designs, original music, and innovative ideas. In 2019 Cirque de Paname will be open to the public presenting their very first show ever, The World of Jaleya. If you are around it would be worth giving this new circus with an original twist a glimpse!