Film buff visiting Paris, or simply looking to recreate a favorite scene? Here's some of the best film locations in Paris for a Parisian movie scavenger hunt

The City of Lights has always been a fantasy setting for romance films, dramatic films, even action films. Even when they couldn’t get the actors and film crew out to an original location (or had issues with permits for example) here in Paris, production crews resorted to recreating sets to look exactly like a specific Parisian location. If you happen to be visiting Paris and are looking to recreate a scene for fun, we have a great list of Paris movie sets for you. Some of these you’ll even be able to stumble upon as you’re reaching another destination, and aren’t quite as out of the way as you might think. Read all the way through to find a map of all the places we’ve listed so you can plan to visit these sites around your schedule!

Even if the bar was shown for just a quick 40 seconds at the end of the film, La Caveau de la Huchette has always been home to some of the world’s greatest jazz musicians since 1946. Since the feature in the film, however, the bar has gained immense popularity with visitors and locals alike. With its swanky upstairs bar and crawling cavernous basement, this unique jazz bar is always filled with tunes and dancers. Whether you’re there for a drink and some music, or want to boogey down to jazzy saxophone tunes, everyone is welcome in this truly unique establishment. Since they’re open every day year-round, there’s no excuse not to come here to enjoy a night out!

A clip of the scene in La La Land

The beautiful Inception bridge is just a quick walk from Trocadero, a popular place for pictures with the Eiffel Tower. You might already find yourself there, in which case just follow Avenue de New York south west until you reach this bridge! In Inception, director Christopher Nolan used the bridge’s symmetrical columns and added mirrors in order to make it appear that the bridge went on forever. Cobb (played by Leonardo DiCaprio) reminds us here in his famous line that “building a dream from your memory is the easiest way to lose your grasp on what's real and what is a dream”. But the bridge is real, you aren’t dreaming, you can really go there yourself, and it’s time to make memories!

Gil (Owen Wilson) on the church steps, where he was found by memeners and artists of the Lost Generation. We’re sure you’ve seen this movie filmed in Paris! The first time we stumbled upon these steps myself, we realized there was something familiar about the area, but couldn’t quite put my finger on what it was.In fact, sitting on the very steps where Owen Wilson had ended his midnight strolls and got picked up by the old 1920s Peugeot to whisk him away for a magical night surrounded by remarkable poets, writers, and other artists.

You can find these steps just behind the Pantheon in the 5th arrondissement. They are located on the left side of the Saint-Étienne-du-Mont church, where you can go to appreciate yet another architecturally beautiful wonder in Paris, and then step off to the side for your own experience of the steps from the fantasy romance film. This is just one of many Midnight in Paris locations, watch the movie again and see where else you can visit in addition to the famous steps! Of course, Marion Cotillard was divine in Midnight in Paris, and here is our fave upcoming French actresses, maybe even the next Marion!

Recreated again in the photo above in the film Cars 2, the restaurant in Ratatouille where Remy and Linguini work together was inspired by Michelin star rated restaurant Tour d’Argent. The epitome of fine dining, this restaurant is often referred to as one of Paris’ oldest restaurants. If you want to eat here, make sure you book way ahead of time, and come prepared with a full wallet and an hungry stomach. We’re sure there aren’t reeally any rats in the kitchen!

A movie revolving around fashion is bound to have a couple scenes shot in Paris, the fashion capital of the world. The fashion show in the film was shot and held at the Musée Galliera in the 16th arrondissement, which is actually a fashion museum which displays three centuries of clothing, accessories, and photography. Andy (played by Anne Hathaway) can also be seen in the movie at Place de la Concorde, throwing her phone into the fountain after reaching peak frustration with her career. The Place de la Concorde is the largest public square in Paris, at the eastern end of the Champs-Elysées.

Before Sunset
​Where: Shakespeare & Co, La Coulée Verte, and more

Before Sunset is a romantic film where two characters meet one day in Venice, and promise to meet again six months later. They find themselves in Paris, rekindling a sudden connection that they experienced long ago.

Shakespeare and Company is an English-language book store in Paris’s left bank. Not only can you come here to enjoy a good read, but the small café is perfect for a quick snack. If you’re an aspiring writer, you’re also welcome to stay for a few nights, free, as long as you help around the store. It’s said that since the shop has opened, over 30,000 people have taken advantage of this opportunity! The store houses all kinds of treasures from literary greats, you never know what you’ll find in the unique spaces of Shakespeare & Co.

More details and locations from Before Sunset

A comedic movie set in Paris, Amélie utilizes the city of Paris as a whole, with plenty of locations across all the arrondissements. We chose one that might be useful if you’re staying for a while, and maybe want to try your hand at cooking a classic French tartiflette.

At Au Marché de la Butte, you can buy your groceries for the week at the market where Amélie often shops, which is right around the corner from her apartment. If you have time, you can find the door to her place just a few strides away.

More details and locations from Amélie 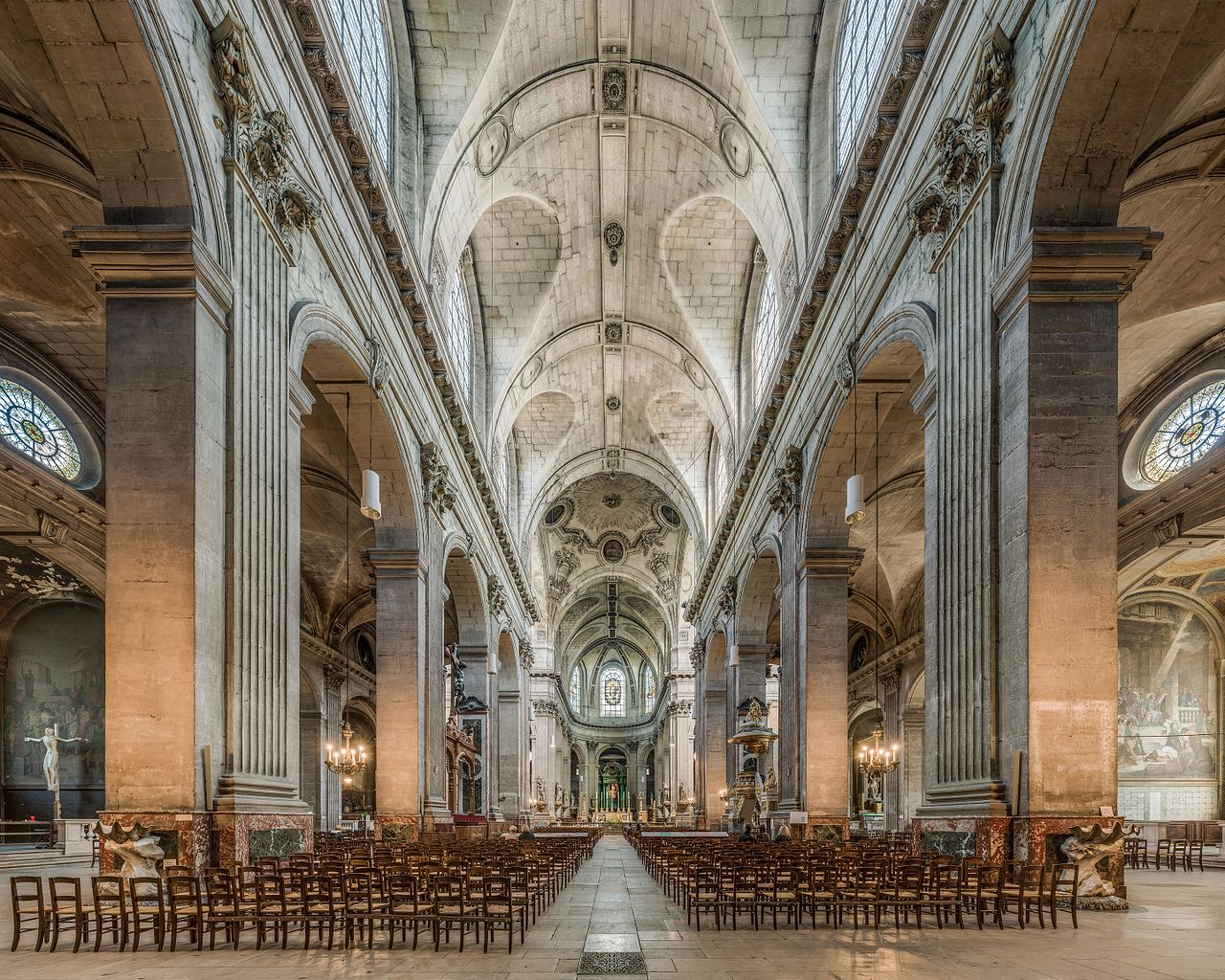 This one is a special case, let us explain why. For a movie set, The Da Vinci Code was able to recreate this Parisian church perfectly. After Notre-Dame, this church is the second largest in Paris, and became popular after its feature in the film. However, the actual filming could not be done in the real church due to some issues, so instead, every detail of the interior was reproduced in a studio in order to make it work. Imagine the work of recreating such a massive venue!

Once you're done touring the streets, following in the steps of celebrated actors like Leonardo Dicaprio and Ethan Hawke, keep the magic going by getting to know some French actors, at the theatre of course!