Guillaume de Tonquédec, the most loved face on French television, plays Antoine Royer in 'A Farewell Dinner' with English surtitles at Théâtre Edouard VII! We interviewed him about the play, the difference between acting on stage and screen, and performing for an international audience...

TiP: Can you tell us a bit about your character?

The difficult thing about the role is that we had to make people understand why his friends want to get rid of him (because he is a serious pain in the neck) but at the same time we had to make him identifiable so people would think “how horrible if that happened to me.” This conflict is what makes the character so interesting to play.

TIP: Is this the kind of role you are used to playing?

GDT: He’s a very extreme character. I don't use my real voice and he has this horrendous laugh that his friends despise. I'm not used to doing that… I had to really go for playing this slightly zany, over the top character, but with as much sincerity as possible in order to ensure that the audience believes in him.

In this sense, theatre is very child-like. As the audience, we sit down in the auditorium and we accept that everything we are going to see is false, and yet it’s real. There is an agreement made between the actor and the audience, in which the actor says, “Everything I am saying is false, it's not me, but you still have to believe it”. And people will still laugh, cry, be moved, appalled by what they see on stage – it's pretty extraordinary.

But in response to your question, no, this is really the first time I've played such an extreme, exaggerated character!

TIP: Is there a specific character or role that you would love to play?

TIP: You are mainly recognised for your on-screen work, so when did you start working for theatre?

GDT: Actually I started in the theatre. I am recognised for my TV work, mainly thanks to the series Fais pas ci, fais pas ça (Don't do this, don't do that) which started in 2007, and then there was the amazing adventure that came with Le prénom (English title: What's in a Name), which started off as a play in 2010 and then was made into a film. We were nominated at the César awards which are like the French Oscars, and I actually won the award for best supporting actor – it was really a huge adventure. But before that I'd done about 20 years of theatre!

TIP: Do you prefer one to the other?

GDT: I've been filming for a few years now, and it's almost more comfortable to film. Theatre is a real physical, mental and moral test. Once the curtain rises, you have to give it your all, no matter what happens.

The audience also likes to see themselves reflected on stage. There is a very important process of catharsis that occurs, which is to some extent what they have paid to experience! They want to recognise themselves or their brother, their friend or their parents on stage in order to learn something about life. So we as actors have this task to accomplish.

I especially felt that in 'Le prénom' [which began as a play], because I had to act some very moving scenes and communicate that emotion to 720 audience members every night, which requires  a lot of physicality. Cinema allows you to be more internal, because the camera catches all your emotions. So when we shot the film, I could do the same scene, in which this character made a very important revelation about his life, in a much more internal way.  I found it fascinating to deliver this truthfulness, because with the camera you can’t give too much or too little, otherwise it just doesn’t work. You have to be spot on.

TIP: Did you shoot the film in order?

GDT: Yes, we were lucky enough to be able to film once straight through in order, in the apartment where all the action occurs. Then we had the chance to work through scene by scene in order to enter even further into the drama, and subsequently into the comedy. It was incredibly exciting.

TIP: Coming back to 'A Farewell Dinner', what attracted you the most to this play?

GDT: At the beginning it was the authors and the director, after having worked with them already. But of course if I hadn't liked the play, or been convinced by the writing I would have said no!

Then I found out I'd be playing opposite Eric Elmosnino, with whom I trained at the Conservatoire de Paris, and whom I find to be a really excellent actor.  He has a wonderful sense of comedy and comedic timing, and is always very truthful.

We've had a lot of fun inventing these characters together. We embellish through the way we play on stage every night, which has been really exciting. 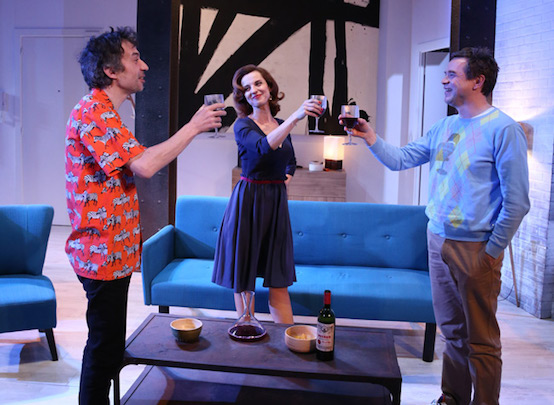 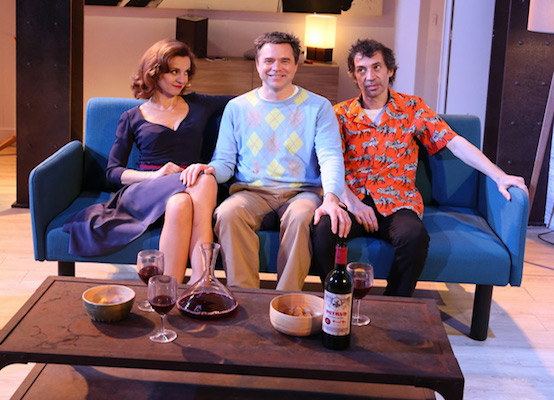 TIP: Did you have any flexibility with the text during the rehearsal process?

GDT: Yes, luckily the authors are still alive so we did have a lot of flexibility with the script. They were present at almost every rehearsal, and at a lot of the performances too. We took things out, added things, made things up... I've never been in a show that has changed and developed as much as this one, from the first performance to now.

TIP: How has it been working with Bernard Murat?

GDT: Bernard manages to achieve one of the most difficult things, which is “just” telling the story. He doesn’t add any incredible special effects, set, music or any of that. He tries to simply tell the story, which is actually very difficult. I think that's the right way to go about a play.

After the adventure of 'Le prénom' and now 'A Farewell Dinner' there is also a real camaraderie, a friendship that has formed between us, which is not all that common in the industry. There is a tangible mutual respect, sensitivity and reciprocal admiration, which is really nice.

TIP: Finally, what do you think international audiences are going to enjoy the most in 'A Farewell Dinner'?

GDT: The Frenchness of it! These are very French authors, who write very French situations and dialogues, which I like a lot. But at the same time, as in all successful plays, there is a real universality. The idea of the Farewell Dinner speaks to everyone, wherever they are from. We all have people that we carry on seeing more out of habit than because we actually want to, and when we are invited to theirs we want to be rid of them. This idea of getting rid of old friends works on an international, universal level. This is why the play really speaks to everyone…

'A Farewell Dinner' is playing with English surtitles at the Théâtre Édouard VII until the end of June 2015!