Back in the 13th century, the rue des Mathurins was situated just outside the city of Paris; it was here that the Mathurins monks managed a large farm, later lending its name to both the street and its theatre. Upon the execution of Louis XVI and Marie Antoinette in the 18th century, the two French leaders were buried in a nearby cemetery. As payment for handing over his land for the usage of the royal burial, Louis XVIII granted the farm's owner and his son authorisation to practice theatre in the modest venues just outside the city gates.

As the city grew and developed, many small boutique hotels sprouted up in the area surrounding the rue des Mathurins, attracting with them a privileged clientele including the dancer Julie Carreau, the Marquis de Beauharnais, George Sand, Maurice Dupin, and more, who would frequent the small concert venues lining the street. In the 1890s, the venue that is now the Théâtre des Mathurins was merely a modest concert hall, with no stage and little seating. Yet at the turn of the century new management took over to transform the building into an intimate playhouse, officially baptised the Théâtre des Mathurins in 1912. In the 1920s, young architect Charles Siclis was entrusted to give the exterior its notable facade contrasting modernity and tradition. A unique architectural approach for this inter-war period, Siclis would go on to design Paris' Théâtre Saint Georges and the Théâtre Pigalle in the same fashion.

It was at the Théâtre des Mathurins that Sacha Guitry would begin his career, opening with his comedy Nono in 1905 when the playwright was only 20 years old. Changing hands many times throughout the 20th century, many well-known figures in French theatre have passed through its doors, with a show programme featuring works by Oscar Wilde, Jean-Paul Sartre, Marguerite Duras, Sacha Guitry, Jean-Pierre Bacri and Florian Zeller. The Théâtre des Mathurins housed the great figures of French theatre throughout the 20th century, and continues in its commitment to featuring upcoming new theatrical talents!

Handicap Accessible? Unfortunately no, this venue is accessible only via staircase 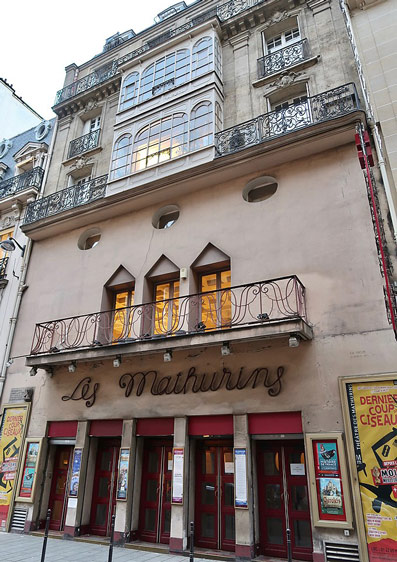 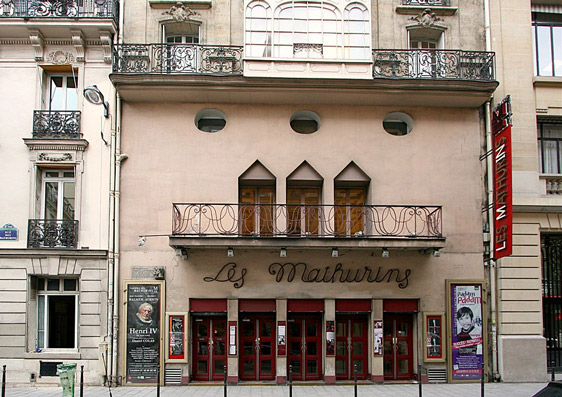 A brand new original musical featuring the untold story behind the creation of the Eiffel Tower, featuring Gustave Eiffel himself, and more!
from 29 €

A hilarious Jules Verne classic, follow the adventures of Phileas Fogg and his loyal valet as they race around the globe!
from 26 €