My First Cabaret at Paradis Latin

Choose your date From 80€/person

What’s that? You’ve yet to go to the Paradis Latin? Well, the perfect opportunity to do so has arrived with My First Cabaret, the creation of the uber-talented Kamel Ouali. Under the spotlight of the beautiful hall created in 1889 by Gustave Eiffel, 25 performers, including two child artists, will dance and sing in a revue which is accessible to children and adults alike. Your eyes will widen in wonder, and your breath will be snatched away!

My First Cabaret at Paradis Latin is a show designed for children and adults. As such, Kamel Ouali, the renowned choreographer and director, wanted to create an original, festive, and participative show to demonstrate to everyone that cabaret is, above all, a moment of pure fantasy. His programme includes acrobats, magic, dance, animations, dazzling special effects, singing, and comedy. All the energy of a cabaret show, adapted to the whole family! Don't miss out!

A historical hall designed by Monsieur Eiffel himself! Listed as a historical landmark and heritage site in Paris, the Paradis Latin’s history dates back to 1803, when the construction of the Théâtre Latin was authorized by Napoleon Bonaparte himself. Its foundations, however, date from the 13th century, as it was built atop the ancient walls of Paris, which themselves were constructed during the reign of King Philippe Auguste. During the Franco-Prussian war in 1870, the Théâtre Latin, along with much of the Latin Quarter, was burned to the ground during the siege of Paris. In 1887, its reconstruction began, led by architect Gustave Eiffel. Built in tandem with the Eiffel Tower, and with similar metal materials, it reopened in January 1889. Renamed “Paradis Latin”, it was thought by Parisian critics and public alike to be the most elegant hall in the city, and the inauguration of its sister construction, the Eiffel Tower, took place five months later. Extraordinary shows and ballets lit up the stage of the Paradis Latin, branding it a total triumph. But the real diamond of its history comes with the launch of Yvette Guilbert, one of the most famous singers of her era.

Hard financial times hit everywhere, however, and after briefly serving as a pharmaceutical factory, the venue closed its doors. Luckily, a new owner has blown the dust off of Gustave Eiffel's impressive metal structure, and the Paradis Latin has been returned to its glory as a celebrated cabaret hall.

A celebration of French entertainment and gastronomy

The enchantment of Paradis Latin comes not only from the show, but from the high-quality cuisine as well, with a modern kitchen layout, a rigorously chosen roster of suppliers, cuisine made from the freshest ingredients, and the highest ability level in the kitchen. French gastronomy is an essential element of Paradis Latin’s festivities! With its privileged location in the heart of Paris, just steps from the Notre-Dame Cathedral in the famous Quartier Latin, an evening at the Paradis Latin is a truly Parisian experience you cannot miss. 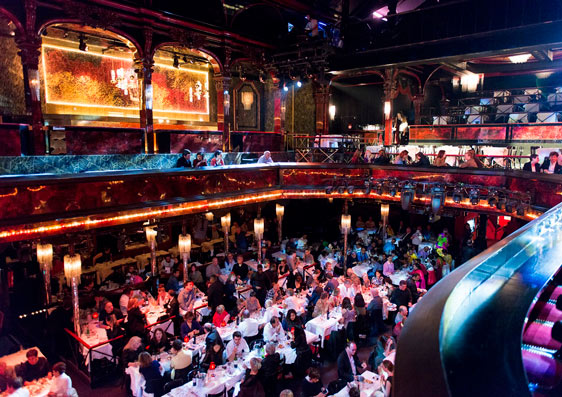 The Paradis Latin is accessible by lines 7 and 10, and the closest metro stations are Cardinal Lemoine and Jussieu. In case of difficulty finding the theatre, our hotline can be reached on weekdays from 10 am to 7pm Paris time. For details, we invite you to consult the map above.

We recommend that you arrive at least 20 minutes before My First Cabaret begins. The doors of the Paradis Latin open at 1.30pm. You will be ushered in by the performers themselves from 1.30 to 2.15pm. The show begins at 2.15pm. Please present your ticket at the reception desk. The cabaret staff will lead you to your seats.

Is My First Cabaret accessible to English speakers?

My First Cabaret presents a collection of acrobatic acts, magic, dance, songs in French and in other original languages. You don't have to speak French to understand the show. Let yourself be carried away.

Is My First Cabaret for the whole family?

My First Cabaret has been designed with the whole family in mind, to share the whimsy of a cabaret show. It’s a great way to share a wholesome family experience!

Is a programme included with my tickets?

Tickets for a show at the Paradis Latin do not include a programme. A souvenir photograph is available for purchase at the venue.

How long does My First Cabaret last?