Choose your date From 121€/person

To get into the Christmas spirit a little early, there is nothing better than going to the Royal Chapel of the Château de Versailles to enjoy the sensational Christmas Oratorio by Johann Sebastian Bach from underneath the gold and stucco. An exceptional evening is guaranteed as the music merges with the dazzling decor.

To make your experience unforgettable, with Theatre in Paris you can choose to include an exclusive offer, such as a glass of champagne and a programme. See below for more information.

See details for a premium option below!

Would you believe that most of the choruses and arias in Bach's Christmas Oratorio are written as secular music, praising local rulers rather than religious ones, and therefore were not intended to be performed in a church? In this magnificent oratorio, Bach parodies himself and adapts existing music to a new purpose: Christmas. The performance of this sublime score by the Monteverdi Choir and the English Baroque Soloists under the direction of John Eliot Gardiner in the Royal Chapel of Versailles will surely be a musical feast. Share the experience with your friends and family, and get into the Christmas spirit ahead of time.

Looking for more than a standard ticket to the show? To make your experience an unforgettable one, you will be able to choose this exclusive offer at the time of booking:

This offer includes a glass of champagne and a printed programme, as well as exclusive access to the best two seating categories.

The Royal Chapel of Versailles

If buildings could talk, what would they say? Certainly, the Royal Chapel of Versailles could tell a tale or two! After all, it was the venue for the marriage between the last king and queen of France: Louis XVI and Marie Antoinette. The chapel’s construction was completed in 1710 during the reign of Louis XVI’s great-great-great-grandfather, Louis XIV, also known as the Sun King. It was the fifth and final chapel to be built at the Palace of Versailles, and it was consecrated to Saint Louis, the patron saint of the king, as well as one of the king’s ancestors.

The architecture itself references this lineage, through several similarities with the Sainte-Chapelle in Paris, which Saint Louis had founded, as well as in the emblazoned double-L motif on the altar symbolizing the saint, and the Sun King together. The vaulted ceiling of the Royal Chapel of Versailles was constructed by Hardouin-Mansart, without the use of transvers ribs, in order to create a vast, uninterrupted depiction of the Holy Trinity, above the heads of the congregation. For decades, this painting would look down on the French Royal Family as they took their daily mass, an event which became renowned across Europe for its use of music, played on a huge organ designed by Cliquot.

The Royal Chapel of Versailles also incorporates classical-inspired designs in its impressive colonnades, which we have come to associate with the Neoclassical boom of the 18th century, however, the chapel’s construction was completed long before the movement really came to prominence, showing that its architects were truly ahead of their time. Since the chapel’s deconsecration in the 19th century, it has become a go-to venue for classical concerts, and so it should be, having been the epicenter of European music in centuries gone by. What better place to experience the history of music! 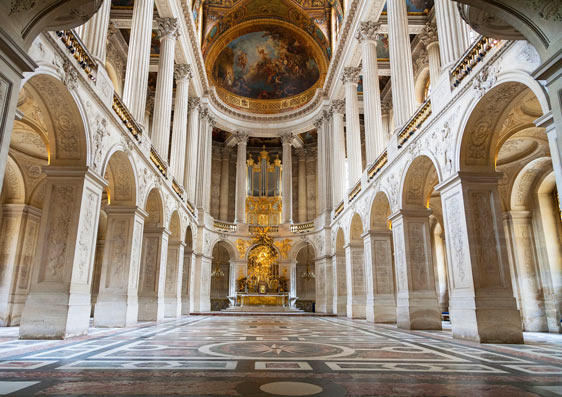 How do I get to the Royal Chapel of Versailles?

What do I do when I get to the Royal Chapel of Versailles?

We recommend that you arrive at least 20 minutes before the start of Bach’s Christmas Oratorio. Show your ticket at reception and the staff will take care of you.

Can I take photos during the Christmas Oratorio?

In order not to disturb the artists and for the comfort of other spectators, it is forbidden to take pictures during the Christmas Oratorio. However, you can take photos of the Royal Chapel before and after the performance to remember your gorgeous Parisian evening!

How long does the Christmas Oratorio last?

The Christmas Oratorio lasts around 3 hours and 30 minutes, with an intermission.

Each spectator is greeted in the hall by an usher who will lead them to the seat. According to custom at the Royal Chapel of Versailles, ushers may request a tip which you may grant if you wish. It is by no means mandatory.