Oscar Fingal O’Flahertie Wills Wilde – the man you know as Oscar Wilde – is a writer as renowned for his legendary flamboyance as for the fruits of his literary imagination. Born in Ireland in 1854, Wilde would go on to pen some of the finest plays, fiction, and essays of the 19th century – dropping along the way his fair share of the period’s most memorable one-liners. To quote a prime specimen, here is Wilde’s tongue in cheek characterisation of his presence in Victorian high society: "I can never travel without my diary, one should always have something sensational to read on the train." If his contemporaries considered the twists and turns of Wilde’s fortunes at best, sensational, and at worst, highly scandalous, today that story has inspired a century-strong fandom of devotees. So what is it exactly in the life and work of this literary legend that makes for such scintillating reading?

Often mistakenly thought of as an oh-so English writer – due to his prominence in London’s literary circles and his education at Oxford – Wilde was actually born in Dublin. His father, Sir William Wilde, was an acclaimed doctor who earned a knighthood for his contributions to Irish medicine; his mother, Jane Elgee, a poet and passionate nationalist writer. With this auspicious heritage as his backdrop, the young Oscar grew into a brilliant and bookish student, placing top of his school and winning a prestigious scholarship to study at Ireland’s leading university, Trinity College Dublin. 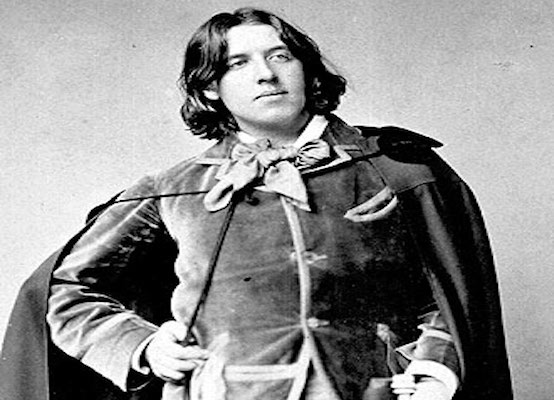 It was not until his second degree at the University of Oxford, however, that Wilde began to cultivate his image as the flamboyant and ever so slightly facetious dandy his society knew and loved to hate. While an undergraduate he became interested in Aestheticism, a theoretical movement upholding that beauty should be the prime pursuit of art and literature, rather than any political or social agenda. Once graduated he embarked on a tour of the United States to give lectures on the subject, and it was there that his notoriety rocketed. As did his taste for extravagant apparel, with a velvet jacket and silk stocking combo becoming the young intellectual’s signature silhouette.

Almost of all Wilde’s major works were penned during a seven-year period of feverish creativity from 1888 to 1895. These include four plays, three collections of children’s stories, various essays and one novel, The Picture of Dorian Gray. Now considered a masterpiece of Victorian fiction and a fixture on English Literature curricula around the world, Wilde’s only novel was met with outrage upon its publication in 1891. Its Victorian readers were scandalised by the perceived immorality of the “poisonous book”, which tells the story of Dorian Gray, a handsome but egotistical young aristocrat who descends into a spiral of hedonistic behaviour. The homoerotic undertones of the novel were no aid to its author’s cause: Wilde was forced to make stringent revisions before a publishing house would print his spectacularly dark study of human vanity.

If you’re tempted by this timeless tale of intrigue and corruption, a play adaptation of The Picture of Dorian Gray is currently running at the Théâtre le Ranelagh, a historic theatre situated in Paris’ 16th arrondissement. Non-French speakers, fear not: English subtitles accompany performances throughout the run, with selected showings entirely in English.

Get your tickets for Dorian Gray

By the time that a censored Dorian Gray reached the eyes of the Victorian public, Wilde’s homosexuality was widely known – and still more widely frowned upon. During the opening run of his best loved play, The Importance of Being Earnest, the scandals surrounding him came to a head. Incensed at a burgeoning romantic relationship between the writer and his son, Lord Alfred Douglas, the Marquess of Queensberry planned to shame the two into ending the relationship. On 18 February 1895, he left a card for Wilde in plain sight, accusing the writer of sodomy, a punishable crime at the time. Fifteen weeks later, after a highly sensational trial that was to decimate Wilde’s reputation and leave him bankrupt, the writer was sentenced to two years hard labour and imprisoned.

The Wilde that emerged from prison was a shadow of his former vibrant self. Broken in spirit and penniless, he fled to France and spent the rest of his days living destitute in hotel rooms paid for with money borrowed from friends. He would die just three years after being released. But even from his deathbed, the writer still managed to muster some of that Wilde-patented humour. Confined to his Saint Germain des Près hotel room and in the throes of meningitis, he joked: “My wallpaper and I are fighting a duel to the death - one or other of us has got to go”. It was to be Oscar Wilde’s last one-liner.

Discover the lives of other literary legends whose plays have graced Paris' stages: