The Intrepid Adventures of Jules Verne

French writer Jules Verne is the second most translated author in the world (pipping Shakespeare to the post and trumped only by Agatha Christie), a founding father of the science fiction genre, and the man who foresaw the invention of the modern submarine. Verne once solemnly promised his parents that he would travel “only in his imagination”. He may have gone on to break that promise, embarking on several intrepid voyages by boat, but he did inspire generations of readers to traverse the world using only their imagination. Discover a man whose life was almost as full of exploit and excitement as the adventure novels he is famed for. 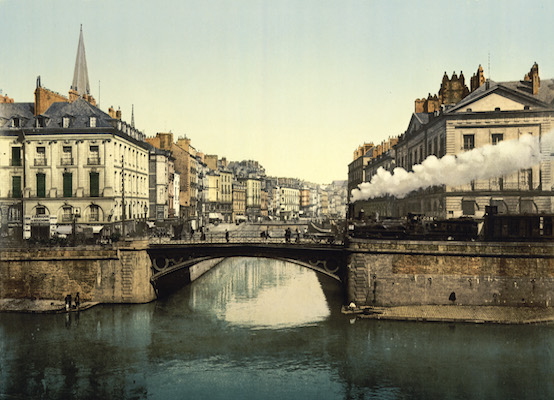 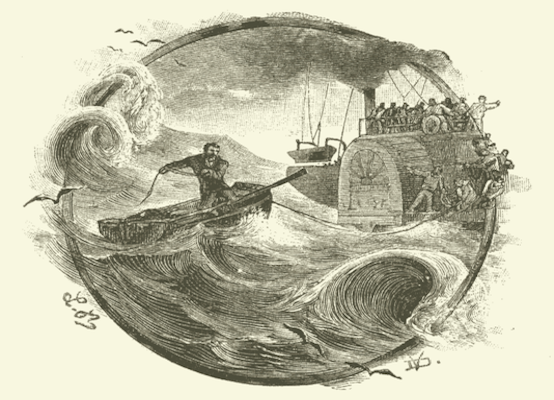 A childhood on the estuary but dreaming of the high seas

Verne was born on 8 February 1828, in the bustling port city of Nantes. Sent to boarding school at the age of 6, it was there that he first encountered the world of swashbuckling adventure. The tales of his teacher Madame Sambin, who claimed that her husband was a shipwrecked castaway, enchanted Verne, and he would spend his childhood watching ships departing from the Loire estuary and dreaming of climbing aboard. Then legend has it that, at the age of just 11 and unbeknownst to his parents, the aspiring mariner procured himself a place as cabin boy on a ship departing for the West Indies. Stopped by his father before making it off the Loire, it was at this moment that Verne vowed to forgo the sailor’s life. That wasn’t to stop the whir of his active imagination, however, and these early seafaring fantasies would go on to pervade his later fiction.

The literary career that took a while to leave port

Turning his back on the voyager’s lifestyle, at age 12 Verne took to the pen. Poetry quickly became an outlet for his adolescent romantic feelings. But it would be many years before the writer could afford to live off his writing, which underwent a rollercoaster ride of evolutions before arriving at the adventurous style for which he is known. Verne’s father, a respected lawyer, turned a blind eye to his son’s literary ambitions, taking it for granted that he too would enter the family profession. In 1848, Vernes was packed off to study law at a prestigious school in Paris. He arrived just as the turmoil of that year’s February Revolution was beginning to mount, but the real excitement of the move, for Vernes, was the access it provided him to the literary circles of the capital.

It was at one of the city’s renowned ‘literary salons’ that Vernes met celebrated playwright Alexandre Dumas. The two formed a close acquaintance and Dumas encouraged his new friend to try his own hand at writing for the stage. Several plays and comic operas followed, though none sufficiently successful to get Verne’s literary career off the ground. Having graduated with a reluctant law degree in January of 1851, he promptly abandoned the family industry and accepted a small role as secretary of Paris’ Théâtre Lyrique. But in May 1856, an unexpected and pleasant surprise put an end to the playwright’s theatrical plans. During a stay in Amiens for the wedding of a close friend, Verne found himself falling madly in love with the sister of the bride. By January of the following year he was married to Honorine de Viane Morel, a young widow with two children in tow. Aware that the odd published play or short story would not suffice to support his new family, Vernes took up a full-time position as a broker at the French stock exchange. 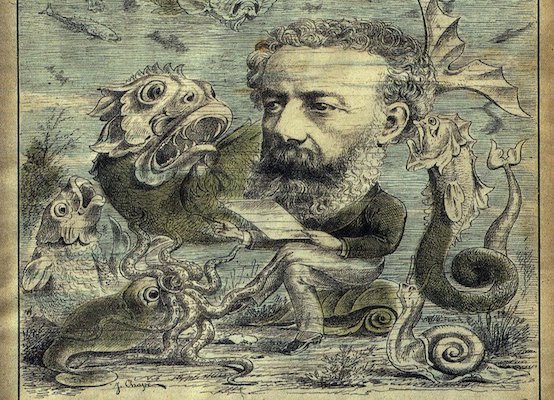 Father to three kids and to the science fiction genre

These new and adult commitments were not enough, however, to tear Vernes from his literary ambitions. He plunged into a punishing daily routine, waking at the crack of dawn to write before heading out for a day’s work at the Bourse. Some mornings would even find him buried in research at France’s national library, poring over the scientific texts and travel narratives he found there. Verne’s childhood passion for far-off lands and unknown territories was once again being ignited. The writer began to dream up a new boundary-crossing kind of novel that would allow him to incorporate the factual information he so enjoyed researching at the library.  Putting the idea for what he called his Roman de la Science to Dumas, Verne received enthusiastic support. He set furiously to work and by 1863 had published his very first novel. Five Weeks in a Balloon tells the fantastical tale of a hot air balloon voyage around Africa, mixing the twists and turns of an adventure narrative with passages of factual description. It is now universally recognised as a founding work of the science fiction genre. 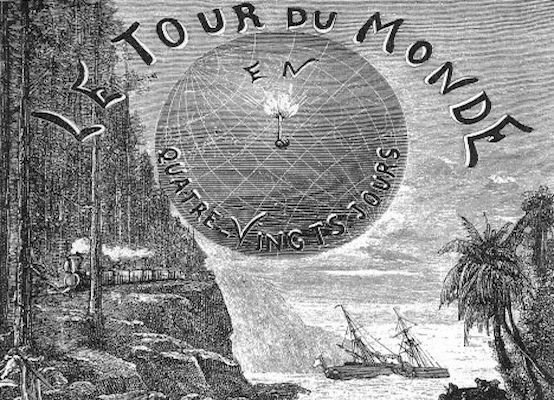 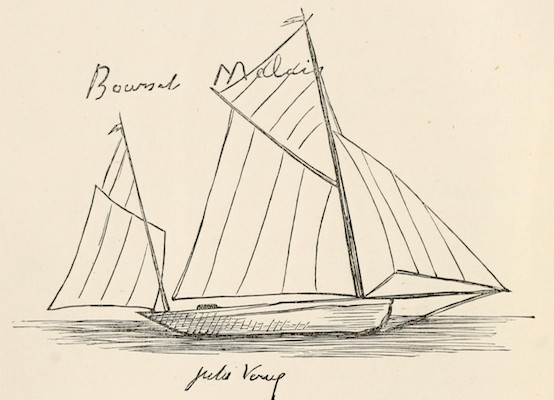 Writing about travel and travelling while writing

The wild success of Five Weeks in a Balloon set off a chain of science fiction novels, recounting adventures as varied as voyages to the bottom of the sea, journeys to the centre of the earth, treks of the North Pole, or trips the Moon and back. Verne’s most famous work remains Around the World in Eighty Days, the knuckle-biting account of a global race against the clock. Phileas Fogg, a respectable English gentleman, is prepared to bet a fortune that he can cut a line across the Earth and make it back to London, you guessed it, exactly 80 days later. It’s a mission that leads him onto transport of all kinds, alongside people of all nationalities, towards adventures of every flavour. And this 150 year old novel is still as popular as ever! You can catch a stage adaption in Paris this summer at the historic Théâtre des Mathurins.

By the time that Around the World was published, Verne’s recognition was as worldwide as his subject matter. He was able to quit his job at the stock exchange and devote himself entirely to writing. Over the course of 40 years he would publish 60 novels and inspire countless interpretations, adaptations, and translations. Meanwhile, Verne used his new found flexibility to set out his own intrepid adventures. Travelling with his friend, with his wife, and later on his very own yacht, Verne made a series of voyages from France to the UK, Scandinavia, America, and then around all of Europe. During a trip to Denmark in 1861, Verne was forced to leave in a hurry and race back to Paris for the birth of his son Michel. Unlike the oh so punctual Phileas Fogg, the writer did not make it back in time and missed the arrival of his only offspring. 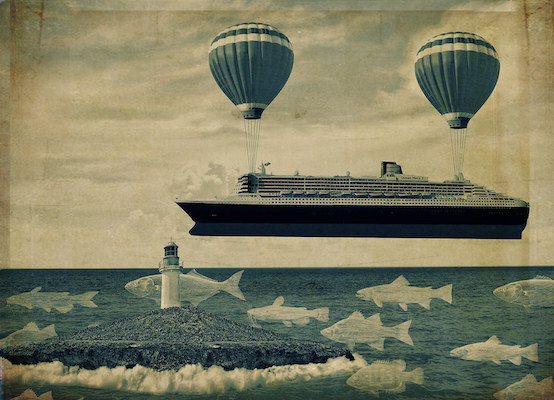 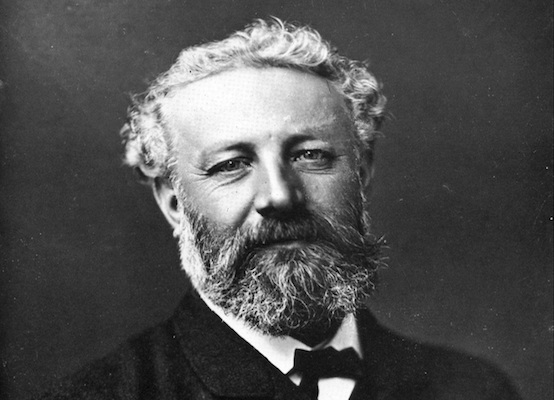 Verne continued writing up until his death in 1905 at the ripe age of 77. And when the novels stopped rolling out, their speculations began to become a reality. The sea-diving machine that Verne dreamed up in Twenty Thousand Leagues Under the Sea came to life in the 1880s with the invention of the first electrically powered submarines. Just a few years after the publication of Around the World in Eighty Days, two women, inspired by the novel, took up the challenge of racing around the world. Nellie Bly would triumph over her competitor Elizabeth Bisland, completing the journey in 72 days, 6 hours, and 11 minutes. In his dystopian novel Paris in the Twentieth Century, Verne envisages a tech-obsessed Paris a century in the future. With almost prophetic accuracy he predicted the skyscrapers, elevators, cars, trains, and electric city lights of today. Little had his 10 year old self known just how close to real life the voyages of his imagination would be.

Liked this article? Why not discover the lives of some other literary legends...

Have you heard of Pierre Corneille?

A Glimpse at the Life of Victor Hugo?