The Explosion of the Parisian Theatre Scene: Facts and Figures

Everyone’s talking about the explosion of the Parisian theatre scene. The last fifty years have seen the number of theatres in Paris double and their offering of shows increase more than fivefold. That makes the French capital something of a dark horse on the global stage: at times overlooked next to the brashness of Broadway or the sheer density of the West End, Paris boasts a theatre district that is booming. Not least because in recent years its stages have begun to open up to the many millions of visitors who descend on the city each year. Our team here at Theatre in Paris works in partnership with theatres to render their performances, whether those be of cabaret, comedy, classic French drama, or more, 100% accessible to English-speaking audiences. Meanwhile, a growing taste for Broadway and West End inspired comédies musicales is giving Parisian theatre a singing, dancing, international flavour. So here’s our definitive low down on the theatre scene spreading like wildfire through the City of Lights…

Get tickets for a Parisian show

What do we mean when we talk about an explosion? Let’s swing back to 1969: man has landed on the moon and the work of avant-garde playwrights Samuel Beckett and Eugène Ionesco is landing on the stages of Paris. But despite giving birth to these theatrical greats, the theatre scene of 60s Paris remains a humble affair, with just 60-odd playhouses dotted across the city and an average of 70 shows per week. Fifty years on, it’s a radically different picture. Recent estimates count 130 theatres, showing around 300 shows per week, which can reach 450 in peak season. That’s enough venues to outstrip both Broadway (which counts 41 theatres) and the West End (with 45), albeit spread out across a much wider surface area. And with a total number of seats rising from 25,000 in 1969 to over 35,000 today, contemporary directors are guaranteed applause still more thunderous than in the time of Beckett and Ionesco. 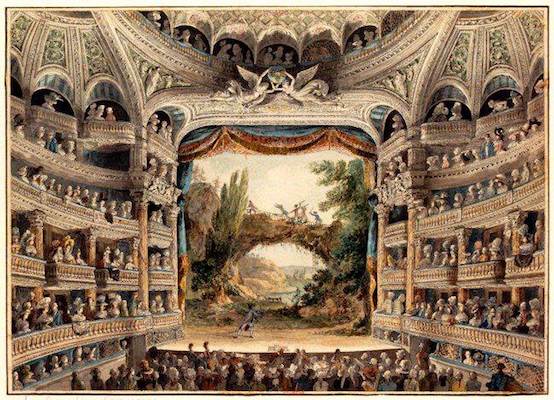 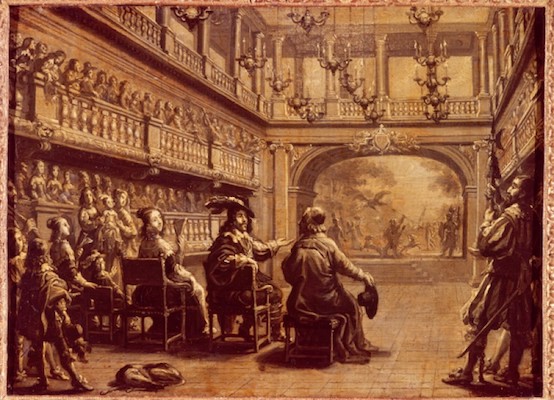 Where did it all come from? The Story of Parisian Theatre

Theatre has always held a cherished place in the heritage of France, which counts literary legends like Molière, Racine and Victor Hugo in its theatrical hall of fame. The country’s long history of public endorsement for theatre is one of the things that makes the French scene truly unique. Since the time of King Louis XIV, a lover of the performing arts who saw theatre as the perfect way to glorify his image as monarch, playwrights and their companies have been receiving support from the state. As well as allowing Molière’s troupe of actors to make use of a theatre within his elaborate Palais Royale, King Louis went so far as to offer the men a regular stipend. Such financial security was a rare luxury for the thespians of the time. Over in England, Queen Elizabeth I was too stingy to support British theatre and the patronage of later Kings James I and Charles I came to an abrupt end with the Civil War, too soon for a formal tradition of state funding to be established.

Whereas in France, King Louis XIV’s payments allowed theatre to flourish. After Molière’s death, his troupe would fuse with another to become the world famous Comédie-Francaise, France’s foremost acting company today. Unlike its equivalents across the Channel, the Comédie-Francaise survived the tumultuous decades of the French Revolution and the state’s funding of theatre has continued uninterrupted. As well as various part-funded establishments, France now has five national theatres paid for entirely by central government. Four of these are found in Paris, alongside several other theatres fully funded by the city’s council. Which meant that in 2018 the City of Paris allocated a whopping 32 million euros in support of its theatres and theatrical projects. For observers from the US or UK, where arts subsidies are rare and theatre is almost always privately funded, it’s an impressive statistic. But more and more private theatres are also opening up in the French capital, which now counts 50 self-funding commercial establishments amongst its extensive state-supported stages. These expanding and multiplying théâtre privés help to explain the explosion of the Parisian theatre scene in recent years.

So where actually is the Parisian theatre district?

France’s many théâtres privés have been around since the second half of the 18th Century, when a series of new establishments settled on the wide boulevards that stretch from Paris’ fabulous Opera Garnier in the 9th arrondissement, all the way up towards République in the 10th. These playhouses sought to offer audiences a lighter, more purely entertaining alternative to the intellectual or historical dramas common in public theatres like the Comédie-Française. A genre of its own emerged in these neighbourhoods, relying on simply drawn characters or plot and tending to avoid any topics that might be deemed controversial. Nowadays, Boulevard Theatre is less common in Paris – though you can still find comedies of this kind at Théâtre Édouard VII – but the surroundings that gave the genre its name remain Paris’ main theatre district today. At every corner along the Grands Boulevards, you’ll find venues offering a variety of comedies, musicals, dance, and more. It’s Paris’ vibrant equivalent to Broadway or the West End.

Get tickets for a show in Paris’ Theatre District

Flash to the present: Paris gets a musical makeover

It’s a few decades later to the party than its UK and US competitors but Paris is increasingly catching on to the world’s musical theatre mania. For fifty years France resisted the genre, while musicals lit up the stages of both New York and London. Musically-trained French actors found themselves limited to pantomimish roles in singing and dancing children’s shows. That changed back in 2004, with the founding of France’s first acting school dedicated specifically to musical theatre. Located in eastern Paris, the prestigious Académie Internationale de Comédie Musicale was the first sign of France’s growing appreciation for more ‘Anglo-Saxon’ forms of entertainment.

Then in 2005, Théâtre Mogador arrived on the scene. In a bid to transport some Broadway glamour to Paris, Dutch production company Stage Entertainment invested in a complete renovation of this historic Parisian theatre and drew up a programme featuring all the best musical favourites. Its French-language adaptations of classics like the Lion King, Cats, Grease, and Chicago have proved a runaway success with residents and visitors alike. Situated at the heart of Paris’ theatre district, the Mogador stands out against the traditional French boutiques and bistros that surround it. Its neon red lettering is an unmissable tribute to the Broadway fever taking Paris by storm.

Get tickets for a musical at Théâtre Mogador 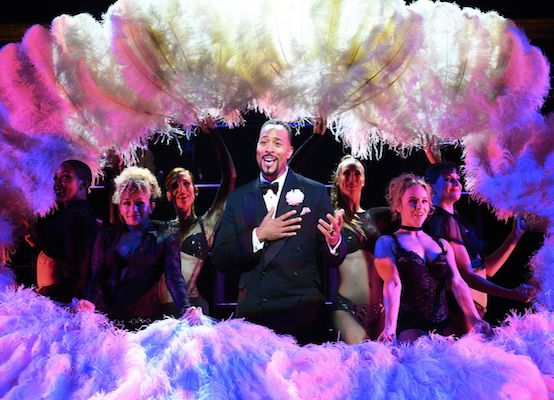 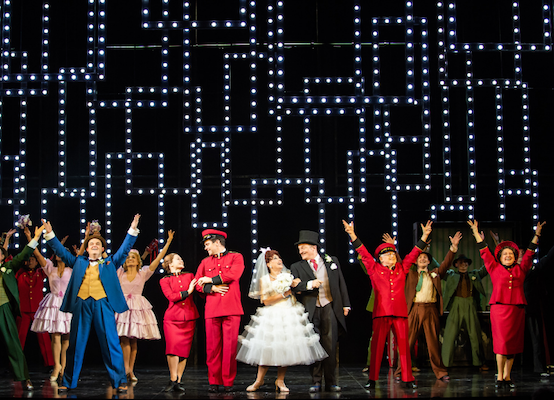 Guys and Dolls at Théâtre Marigny

Kicked into action by the popularity of the Mogador formula, other Parisian theatres have begun to follow suit. In 2010, the Théâtre du Chatelet paid homage to the Golden Age of American musicals with a sell-out run of Stephen’s Sondheim’s A Little Night Music. Kiss me, Kate, The King and I, and My Fair Lady soon followed. A newly and gorgeously renovated Théâtre Marigny is the latest Parisian theatre to join the toe-tapping bandwagon. Reopened in 2018 under the direction of Jean-Luc Choplin – the man who brought comédies musicales to Théâtre du Châtelet – Marigny has promised to dedicate the larger of its two stages entirely to Broadway-style musicals.

Get tickets for a musical at Théâtre Marigny

Time to ride the wave of the theatrical explosion!

It’s fair to say that Paris is undergoing a scenery change with its eyes fixed firmly on Broadway and the West End. Which doesn’t mean its theatres have lost the charm that belongs to the City of Lights alone: their history stretching back to the time of Molière, the generous state funding unique to France, a wider dispersal of playhouses around the city so that each one is embedded in the history of its neighbourhood. The language barrier may historically have prevented visitors (who make up more than 50% of audiences in New York and London) from enjoying this distinctive theatre scene, but nowadays French stages are beckoning in their English-speaking spectators. Whether it’s classic French comedies subtitled in English or Broadway inspired musicals subtitled in French, Paris’ theatrical offering is increasingly bilingual. And Theatre in Paris provides the definitive list of English-friendly Parisian theatre. So regardless of how rusty those high school classes have left you, you can still join the French thespians for a theatrical soirée!

Get tickets for an English-friendly show

Liked this article? Check out others like it from Theatre in Paris:

Beyond Broadway: Musicals in Paris

Theatre Surtitles: Past, Present, and Future

Famous French Playwrights Past and Present