Paris’ famous Place de la Bastille is a geographical and historical centrepiece of the city. As the intersection of several major Parisian boulevards, as well as the 4th, 11th, and 12th arrondissements, Bastille has become one of the French capital’s busiest roundabouts. The  area that splays off to all sides is equally lively: a hotspot for trendy bars, boutiques and an abundance of eateries. But the sight that greeted passersby way back in the late 18th century could not have been more different… In those days the square was dominated by a colossal turreted fortress, the historic and gruesome Bastille prison. It’s this eclectic mix of revolutionary history and contemporary culture that makes the neighbourhood one of our very favourites. So here’s our definitive list of what to see, do, eat, and drink all around Bastille!

No intrepid Parisian explorer will be able to resist the action-packed history that made this neighbourhood what it is. On the 14 July 1789, the people of Paris used stolen guns and gunpowder to storm the Bastille fortress and liberate prisoners held captive inside. This sudden day of defiance was only to change the course of history and spark a certain earth-shaking event known as the French Revolution. Nowadays no trace remains of the prison’s original structure, which was demolished at record speed by revolutionaries after its capture. But it’s still worth closing your eyes and imagining 80ft’s worth of prison cells and dungeons that used to occupy this roundabout. Once you’ve enjoyed a momentary trip back to the horrors of the 18th century, reopen your eyes and feast them on what actually stands where the Bastille once would have: the July Column, a gold-adorned Parisian monument built to commemorate the French Revolution.

On the 200th anniversary of the storming of the Bastille, former French president François Mitterrand inaugurated an equally impressive, if slightly more futuristic Parisian building: the Opéra Bastille. A feat of contemporary architecture composed of hundreds of stacked squares in chrome and glass, the Opera is a sight to see in its own right. It was designed by Uruguayan architect Carlos Ott, after Paris decided it needed a newer, more state of the art opera house to complement the timeless Palais Garnier. These days it’s possible to visit the Opera Bastille and discover the intricate backstage world that keeps a programme of over 50 award-winning operas and ballets ticking over each season. Guided tours are available at a small cost for individuals in French and for groups in English and French.

Get tickets for shows at the Opera Bastille

History lovers seeking a different kind of cultural heritage can head to the Musée du Fumeur, a fantastically kitsch Parisian museum dedicated to the age-old practice of smoking. Not to be mistaken for a standard boutique selling smoking paraphernalia, this gallery tells the story of a past-time that began in ancient times and continues all over the world today. Centuries-old snuff boxes, traditional Chinese pipes, tobacco drying racks from the Americas, and lighters from Tibet: all these and more make up the museum’s collection of curiosities, which crowd in glass cases under a psychedelic painted ceiling. Balancing out the antique feel are a bunch of fresh tobacco plants growing live in a terrarium onsite.

Discover our top picks of the best quirky museums in Paris

Stroll south of Place de la Bastille and you’ll arrive at an idyllic harbour with jetty and pleasure boats. If not for the July Column glinting in the distance, you’ll think you’ve left Paris for Amsterdam or the seaside. Don’t fret, you’re still in France and the Bassin de l’Arsenal is the meeting place of Paris’ two major waterways: the Seine and Canal Saint-Martin. Originally excavated to replace the moat of the Bastille, today this marina serves purely pleasure purposes. It’s home to the permanent and temporary houseboats of Paris. There’s a pretty garden all along one side and the port is also the departure point for Canauxrama’s barge tours. Float upwards towards the North of Paris, passing the city’s old locks and footbridges on the way.

Where the revolutionaries did their groceries: The Marché d’Aligre

If you’re looking for more traditional fare than that offered in the ultra trendy restaurants surrounding Bastille, check out the Marché d’Aligre, a lively market that has been running since before the revolution. Open six days a week, the market has everything you could desire, from veggies to antique furniture and a whole lot of cheese. It’s divided into two parts, with the traditional outdoor market complemented by a grander indoor space taken up by to food stands. As well as craft beers and, you guessed it, more cheese, you can find cuisine from all four corners of the globe. And while the outdoor marketers shut up shop at 1:30pm, the interior reopens for a daily Round 2 from 4 until 7:30pm.

All Paris residents have heard of the Big Mamma restaurant group. Pass by Opera, Oberkampf, or Pigalle on a Friday evening and you’ll find queues backing up behind a set of establishments that have one thing in common: they all serve pizzas topped with a burrata so oozey it will turn the tensest of customers to goo. Bastille’s contribution to the chain, East Mamma, is no different. With cheese traded by shepherds in the foothills of the Dolomites and wine fresh from vineyards in Tuscany (we exaggerate... but the ingredients are definitely imported from Italy ok), you won’t find more authentic Italian flavours anywhere in Paris. Which brings us to some crucial advice: show up nice and early as Big Mamma don’t take reservations and you won’t be the only pilgrims prepared to queue for that Burrata.

East Mamma sits on the rue du Faubourg Saint-Antoine, a trendy Parisian boulevard that splinters into dozens of quaint courtyards and covered passages to either side. Back in the day, these alleyways made up Paris’ artisan quarter, home to the workshops of furniture-makers and craftsmen. It’s well worth taking the time to explore these hidden pockets, whose cobblestones and creeping ivy will transport you back to a quainter, calmer Paris. In reality, the history of the area is anything but tranquil. During the 19th century these rues gained a reputation for turbulence, becoming the focal point of several major people’s revolts. Thanks to their narrow side alleys and passageways, the streets were easily barricaded and residents would have been no strangers to a bullet or two whistling by the window. 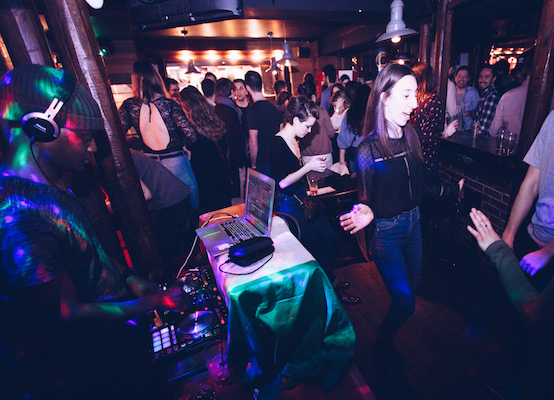 From student nights to smooth jazz: the nightclubs of Bastille

Bastille hasn’t seen any revolutionary action for centuries but it’s still known as one of Paris’ liveliest neighbourhoods. That’s thanks to the abundance of bars and nightclubs that populate the area. Three recommendations to get your night out planning started: try Badaboum, Les Disquaires, or Yellow Mad Monkey. Clustered right around the corner from one another, the three establishments provide a perfect sliding scale of nocturnal entertainment. At one end of the spectrum there’s Les Disquaires, an intimate bar hosting jazz, funk and soul concerts until the early hours. On the other: Badaboum, another sometimes-gig-venue, but one where you’re more likely to find up and coming techno DJs playing to strobe lighting and pounding bass. For a happy medium between the two, check out the Yellow Mad Monkey, an American-styled nightclub complete with beer pong and pinball machines. Regular themed nights and student bookings give this one a youthful crowd.

Bastille’s answer to the country stroll: Walk the Coulée Verte

If you’re more into country walks than clubbing, try strolling the Coulée Verte, also known as Paris’ Promenade Planteé. Beginning just behind Opera Bastille and unfurling all the way out to the Bois de Vincennes, the Coulée Verte is a stretch of elevated parkland that traces the path of a former viaduct. At its height, the park reaches 10m above ground level; elsewhere it descends again to rejoin the walkers, bikers, or skateboarders down on Earth. Cutting over roads and in-between apartment blocks, this sprawling tree-lined walkway offers a truly spectacular view out over the city of Paris.

Pedestrians tailing the Coulée Verte at ground level will be blissfully unaware of the green oasis stretching over their heads. But if you join the trail at Bastille you can’t help but miss the red brick structure of the viaduct, grandest at this end. Nestled under the historic arches lies the Viaduc des Arts, an artists’ collective, gallery space, and meeting point for the craftspeople of Paris. Regular exhibitions and special events celebrate the work of the 50 resident artists and designers who have their ateliers in the building, as well as pieces by invited contributors. Meanwhile, the Viaduc’s boutique offers a permanent stock of art for sale, including a colourful array of intricate hand-crafted items from jewellery to toys and musical instruments. If you’re not looking to buy, it’s the most aesthetically pleasing window shopping location in town.

Another one for the foodies among you: Mokonuts is an intimate fusion café tucked a little way off from Place de la Bastille. Within the confines of this dinky establishment you can find flavours from across the globe. Launched by Moko Hirayama, a Japanese-American, and her husband Omar Koreitem, born in Lebanon but raised in France, Mokonuts blends Parisian patisserie and American baking with flavours from Japan and the Middle East. Which makes for a menu that has boasted labneh cheesecake, halva-folded pecan pie, French hake with tahini, or a potentially infinite list of other exotic combinations. A special shout-out goes to Hirayama’s irresistible cookies: baked practically to order in batches throughout the day, these gooey delights often come warm and always melt in the mouth.

Rum in the Rainforest: Amazonas

Bringing Bastille a caribbean twist, Amazonas is a rum bar that pays tribute to its roots in the Dominican Republic. From the outside, the bar resembles a tropical rainforest crammed forcibly into a greenhouse or else a gardening store on steroids. This only just-tamed jungle is in fact a trendy cocktail bar whose exotic concoctions share one common ingredient. If rum isn’t your thing then this joint won’t be either; but those after a stiff drink in an imaginatively dressed establishment need look no further. Thanks to its thick foliage, the bar even has the benefit of reducing Paris’ carbon footprint.

Stop for a picnic at Place des Vosges

Straddling the Marais and Bastille neighbourhoods is Place des Vosges, a stylish Parisian park and one of the oldest squares in the city. Surrounded on four sides by four identical terraced facades, the square is a rare example of red brick Parisian architecture. Once the mansions of France’s aristocracy, now the buildings contain a variety of little boutiques and galleries. All face onto an immaculate lawn, complete with clipped bushes and fountains in the quintessential French style. It's a watering hole for passing flaneurs. For a dose of history after your park break, seek out the Maison de Victor Hugo. The house where the legendary French writer resided and wrote a large portion of his masterpiece Les Miserables has been converted into a museum paying homage to his life.

Now that you’ve seen, eaten, and drunk all that the streets of Bastille have to offer, why not check out our guides to some other Parisian neighbourhoods?